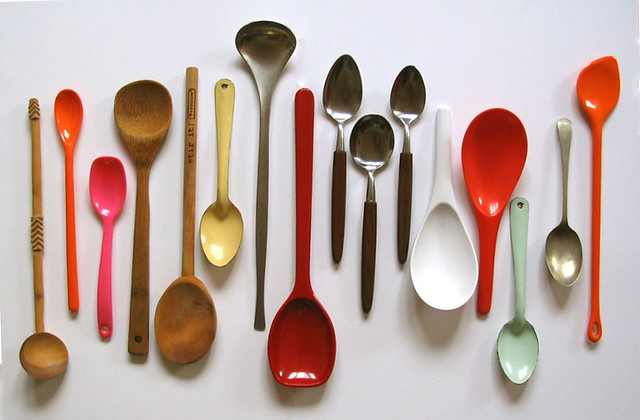 The Spoon Theory. Maybe you’ve heard of it before. Maybe you’re wondering what crazy person would form a theory about spoons. Seriously, spoons? Salad tongs are so much more interesting.

So what is the Spoon Theory, anyway? And why am I telling you about it?

Sorry to disappoint you, but the Spoon Theory is not some secret silverware code. It really doesn’t have to do with spoons at all.

It is simply a way for people with chronic illnesses to describe their complicated energy levels to “normal” people who are curious. It’s a metaphor that makes a lot more sense than anything I could think of. And if you ask me, it’s accurate. Well, kind of.

But before I slam you in the face with my own opinion about the Spoon Theory, let me first explain how it works. It’s a pretty simple idea: everyone’s energy is measured in spoons. And every activity you do requires you to use some of those spoons.

Now, let’s say that “normal” people who don’t have chronic illnesses and have “normal” energy levels start each day with around 25 spoons. Everything you do throughout the day costs spoons. Getting out of bed, brushing your teeth, getting dressed, taking a shower, going to school, eating lunch, doing homework, exercising, going out, shopping, it all costs spoons. Of course, some things cost more spoons than others. Going to work might cost around 4 spoons while taking a shower is only 1. But with 25 spoons, most people can comfortably get through the day and do everything they need to do.

However, people with chronic illnesses may only start each day with 10 or 15 or 20 spoons. The energy we have isn’t enough to get through the day. We have to pick and choose. If we take a shower, go to school, go to sports practice, and eat dinner, we might not have any spoons left to call a friend. And on top of that, managing symptoms and medications take some of our spoons, too. Although we can borrow spoons from tomorrow, if we take 3 extra spoons to go to the mall with some friends, we might only have 8 spoons the next day.

The point of this analogy is to show that living with a chronic illness is exhausting. We automatically start every day with less energy. Or in some cases, we may start with 25 spoons, but every activity we do takes more out of us than it would from a “normal” person. On some days, simple tasks like getting out of bed or eating a meal may take 3 spoons. And if we aren’t feeling well, we might only have room to do a few more things before we crash.

The Spoon Theory is a simple way to explain a not so simple idea.

Because of our lack of spoons, people with chronic illnesses often feel like we are lazy, or slow, or not trying hard enough since we don’t have the spoons to pay for what we want to do. And it sucks when you want to, and often times need to, do things when you don’t have the energy to do them.

Now you may be wondering why when I introduced the Spoon Theory I said that it is only “kind of” accurate. Thinking of energy in terms of spoons is helpful when you want to explain chronic illness in simple terms. But using this metaphor implies that the chronically ill have a sense of control. It gives us and other people the idea that by using simple math, we can calculate our spoons and activities and create a schedule that aligns with how much energy we have.

But this isn’t true. Most of us don’t have control. Some days, I might wake up with more spoons than most of my friends. Say around 30. But because of the nature of IBD, those spoons can disappear in an instant for no apparent reason and I’ll have 8 left in a snap. A shower may have required 1 spoon yesterday, but today, it could take 5. And I have no way of knowing or changing that reality. I might ask a friend for plans when I have 15 spoons. But when they text back 30 minutes later I might only have 4. Now, I could choose to use those 4 and borrow a few spoons from tomorrow, but I don’t know how many spoons I will wake up with each day. So if I only have 4 but end up borrowing 3, I could be stuck with only 5 tomorrow. And I could take 5 more from the next day, but when you take energy from the next day, and the next day, and the next day, eventually you don’t have any left to take. And then you have to spend energy recovering from using your energy. It’s a vicious cycle.

The Spoon Theory is great. It’s clear, it’s helpful, and it gives me something to say when people ask me about my illness. But it’s an idealized version of my life. It doesn’t account for pain. It doesn’t account for good days, bad days, and confusing days where I don’t know if I should go on a run or take a nap. But that’s because all of those things are out of my control. I can’t control my energy and I can’t control my disease. And niether can a whole bunch of spoons 😂.

In a sense, the Spoon Theory helps me and other people understand this lack of control. It helps explain just how much energy a shower, or a meal, or a phone call takes out of us to people who don’t experience fatigue. It visualizes the process we go through when deciding if something is worth our energy. And it reminds us that we aren’t able to do everything every day- and that’s ok.

So, even though the Spoon Theory gives me that tiny bit of false hope that equation to plan out my energy use for the week, I am incredibly thankful for it and other metaphors like it. They are the reason why other people can understand and support people like me. They make sense of symptoms that I can’t explain myself. And yeah, I admit they may not be perfect. But neither are we.

Published by Livin' the Crohn's life

View all posts by Livin' the Crohn's life

3 thoughts on “Digesting The Spoon Theory”