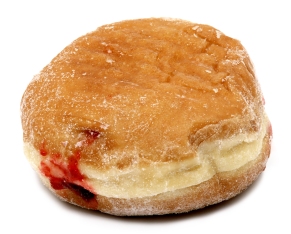 If you live with Crohn’s, Colitis, or any other illness, you’ve probably been given a complex explanation of what your condition is. But do you really know what’s going on inside your body? And if the answer is yes, do you really think your friends would understand if you tried to teach them? Sadly, most people don’t have a clue what IBD is, and trying to explain it to them without getting caught up in a bunch of medical jargon is extremely difficult, especially if you don’t fully understand it yourself. So rather than try to mimic a biology professor, I decided to come up with a simple, understandable way to explain what IBD really is in an entertaining way. I’ll give you a hint: it involves donuts.
So, here we go:

Let’s say each one of us is a jelly donut in a huge donut shop. We were all baked from different recipes, which means that we are all different shapes and sizes, and we are all filled with slightly different types of jelly. And since we’re donuts, instead of eating food, we eat sprinkles.

Now, when one of these donuts gets sick, their filling falls out, or clumps together, or gets moldy. But don’t worry; each donut has their own personal baker who simply scoops out the gross jelly and replaces it with some fresh, new filling to fill the space. Soon enough, the donut is good to go! (For a human, this is called your immune system. Sometimes, germs enter our bodies and make us sick. But our immune systems attack the germs and forces them out, making us healthy again.)

Believe it or not, bakers have very complicated jobs. They have to be constantly watching their donut to make sure there’s nothing wrong with the jelly. And if there is, the baker has to fix the problem as fast as they can, or else the donut will get sicker and sicker.

The strange thing is that most bakers don’t start out confused. In fact, most of the bakers that will end up messing up their donuts don’t do anything wrong until the donut is about 18-50 years old. (In donut years, of course.) But their bakers who get confused when their donut is only 6 months old, and bakers who do their job perfectly until their donut is already 70 years old!

Now, what happens exactly when a baker gets confused? It usually goes something like this:

(Remember, a donut has to be born with a special baker for this to happen- most donuts will not experience it.) A donut will get sick. Nothing out of the ordinary, just a regular donut disease that makes their jelly moldy. So, just like any other baker, this donut’s baker will scoop out the moldy parts and the donut will heal. But when the baker gets confused, instead of just scooping out the moldy jelly, the baker starts scooping out the regular jelly. To compensate for the empty space, the baker refills the donut with more jelly. The baker doesn’t realize that the moldy jelly is already gone, and they think that the healthy parts of the donut are dangerous mold. So, the baker keeps taking more and more normal jelly out of the donut. After scooping out jelly over and over again and trying to refill it in time, the baker ends up hurting the donut and making it very sick. But this type of sickness isn’t an ordinary donut disease. The donut gets swollen, and the jelly starts rubbing against the cake, making little cuts in it. The donut starts to feel tired and in pain from trying to fight the baker’s craziness. But the baker still doesn’t realize that the donut isn’t moldy anymore, and keeps scooping out the good jelly. 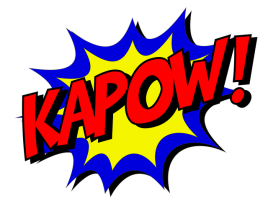 Thankfully, the confused bakers can be taught how to do things right by baking teachers. With a good teacher, they will calm down and only take out the donut’s jelly when it is actually sick. Once the crazy baker calms down, the baking teachers help fix the damage that was done to the donut.

In this story, the baking teachers represent medicine. When a person is diagnosed with an autoimmune disease, they are given medicine to calm down their immune system. This medicine might also help fix some of the problems caused by their immune system’s crazy attack. Sometimes, it takes a while to find a medicine that will work. But don’t worry; new medicines are being created all the time, so even if the first few don’t work, there are plenty of others available.

While IBD and other autoimmune diseases are a lot more complicated than this story suggests, it provides enough understanding to explain your condition to other people without getting lost in the world of medical jargon. So the next time someone asks for an explanation of your disease, all you have to say is , “It’s not that complicated. Basically, I’m just a donut.”

I am NOT a medical professional and this post is for educational/entertainment purposes only. Please seek medical attention if you think you may be suffering from IBD or another autoimmune disease. This is not to be used to diagnose any medical condition- it’s purpose is to explain autoimmune disease in a fun, simplified way.

Published by Livin' the Crohn's life

View all posts by Livin' the Crohn's life

One thought on “IBD is just a donut”